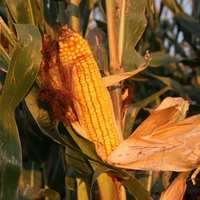 Corn(Zea mays L) is a member of the grasses family Poaceae. It is cultivated as a staple food all over the world. It is originated in America and spread all over the world as a food crop. Corn is used as human food, livestock feed, bio-fuel, and as a raw material in the industries. It is grown as an annual crop that has erect, stout, and solid stems. usually, one or two corns produce on each stalk. In this article, we will discuss how many ears grow on a stalk?.

How many corns appear on a stalk?

Corn usually produces one or two ears of corn per plant. Corn is a heavy feeder crop that requires a lot of nutrients, water, to produce tasty and crispy kernels. Moreover, the first ear is always of better quality than the other. Some specific baby corn varieties induced nowadays produced six to ten small ears per stalk.

What are the ears of corn?

Corn is also known as maize. While the ear of the corn has cob, kernels, husk, and silk. We harvest the ears of corn when they nature.

It is the central core on which the kernels grow.

The seeds of the maize or corn are the kernels.

The leaves that wrap around the cross cob are called the husk.

It is the collection of fine threads that grow on the top of the ears.

How do we know corn is ready to harvest?

There are many varieties of corn grown in the world. Many of them have different growing times and harvesting times. Most cultivars will take 60 to 100 days to mature. However, when the ears of corns turned dark green color and the beard looks dry and black, it is time to harvest the crop. You check the kernels that are hard or not easy to squeeze.

How many kernels are in one corn ear?

Usually, 16 rows of kernels are present on the ears of corn.  while approximately 800 kernels are arranged in rows.

Why does corn only produce one or two ears per stalk?

It depends on the population density. Nowadays farmers decreased the distance between the corn plants. Corns usually are heavy feeders, they require plenty of light, nutrients, water, and other growing conditions. The plants compete with each other for their needs or growing requirements. All these factors affect the ears’ quality, size, and average yield.  However, more water, nutrients, and light will produce more branching. On the other hand, a genetic factor also has an impact on crop health and physique.

Do corn stalks keep producing after the first harvest?

Each corn stalk produces only one crop of maize. After harvesting, stalks collect from the soil and treat as animal feed or raw materials. Moreover, we can use stalks in the soil to increase its fertility for the next crop.

Why we should harvest the corn at the proper time?

We should harvest the crop at the proper time because it produces starch on the ears. Starch affects the kernel’s taste and colors. Therefore, always start harvesting the corns at their peak ripeness.

Corn is a versatile crop, which gives refreshment and nourishment to both animals and humans. It produces only one or two ears of corns per plant. Each ear supplies a huge amount of nutrition and energy. Usually, the corn crop is very rewarding to grow and delicious to eat.